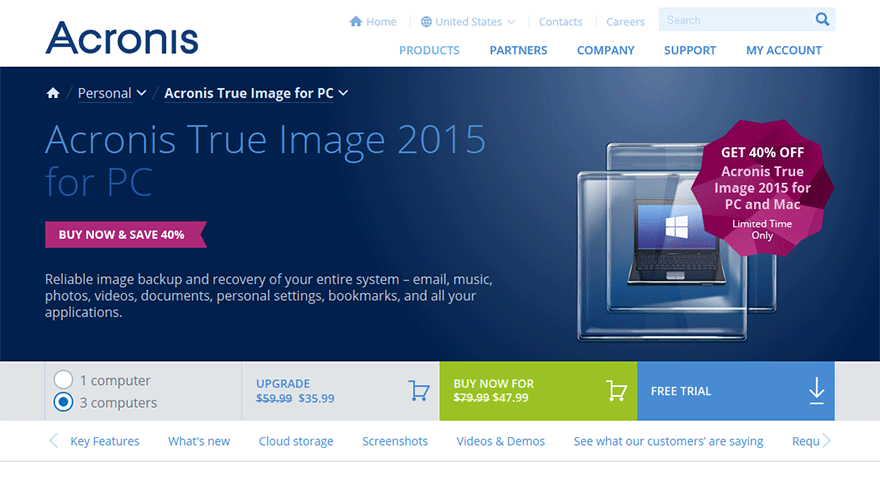 This backup solution now offers a cloud backup solution along with local storage to have your data available in the cloud. Supports Mac and PC with various packages available. Includes access to AES-256 encryption to protect your data.

We found the a-la-cart pricing for their cloud solutions to be quite expensive including a hefty price tag of $189.99 for 1TB of storage. For those that want online backup storage with this software, consider starting with the Unlimited package which has a reasonable price.

True Image 2015 is a complete backup solution that protects everything on your computer, whether you use a Mac or PC.  The actual software is very user intuitive and includes the ability to backup your computer to any large capacity drive including externally connected drives.

Universal Restore: This is a really powerful feature that was introduced in the 2015 version that allows universal backup and restore of your primary computer system. It allows you to create a backup from one computer and restore that backup to another PC, regardless of the PC make or model. This feature doesn’t appear to be available on the Mac edition. 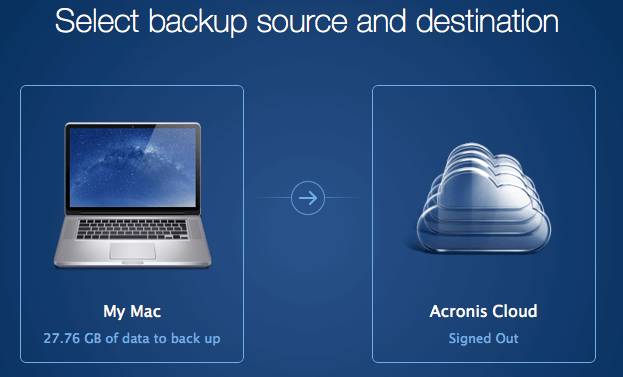 Easy Interface: The GUI (interface) in the 2015 version has been drastically improved from the 2014 version. As you navigate and use True Image 2015, you’ll notice that there was a strong attention to detail from their designers to make the software as easy and intuitive as possible. We noticed this on both the Mac and PC versions of the software.

Easy Recovery: Did you make a big mistake and feel the need to reinstall your operating system? If you have backups created, True Image 2015 makes it incredibly easy to restore your computer to an earlier time with little hassle. Go back a week and pretend that huge mistake never happened. You will be able to restore your computer from 10 previous states on the Mac version and 20 previous states on the PC version. 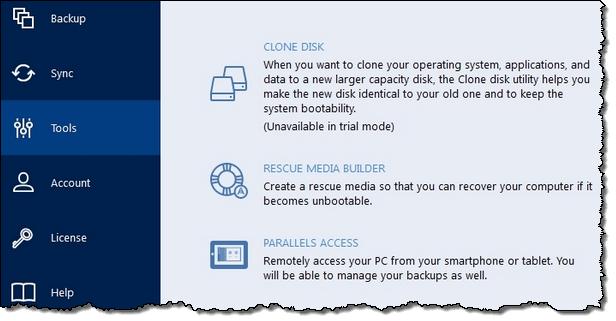 Awesome Disk Tools: One of the first things you should do after installing this software is to create a rescue media so that if your computer completely fails to boot, for instance, constant BSODs (Blue Screen of Death), then you can pop in your rescue disk, recover from a previous backup and you’ll be on your way. You can also create a recovery media via a USB flash drive if you’d like. Also on this screen, you’ll find access to a disk cloning tool and a remote access feature to access your PC from a smartphone or tablet.

Security: Your backups can be protected with a personal password-protected key using AES-256 encryption to help prevent unauthorized access to your backups. 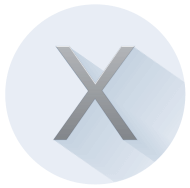 Mac Features: Acronis True Image 2015 is Parallels Desktop 9+ compatible so that you’ll be able to backup your virtual machines in the same way you’d backup your traditional Mac system. Backups now use encryption and a compression layer to use 3x less space. Full Bootcamp, File Vault 2 and Fusion Drive support is available. This software is also fully compatible with Mac OS X 10.10 and later.

Other Features Include: Compress your backups, split your image files for easier storage, daily through monthly scheduling and Backup Reserve Copy which allows easy duplication of a backup to a 2nd location.

Backup to the Cloud: This is an optional feature that will cost an additional fee unless you choose the “Unlimited” version which includes the cloud backup service as part of the package. See the pricing options below for pricing information related to this feature. Acronis True Image 2015 has been optimized to allow the fastest upload and transfer speeds as possible including incremental and differential backups to help ensure you always have the latest version uploaded without requiring massive GBs to be transferred all the time.

Acronis True Image 2015 comes with several configurations to choose from. Be sure to use the button on this review page to access their current promotions and discounts which appear to release frequently. At the time of this review, the pricing is as follows:

According to the fair usage policy, the above pricing is for 1 full system backup and meant for customers that have multiple PCs that want to mirror the same data across all platforms. You may not exceed 3TB of disk space usage per physical machine on the cloud service.

If you want to take advantage of backing up your computer to the cloud, with exception to the unlimited plan which includes cloud backup, you can expect to pay the following in additional fees:

Currently, if you combine the cost of True Image for PC and 250GB of storage, it amounts to $89.98 on their website. If you want to store your data to the cloud, we’d strongly recommend getting their True Image Unlimited package for $99.99 which includes unlimited PCs and Macs with up to 3TB of storage use, a far better deal.

If you are upgrading from an earlier version, upgrade pricing is available.

Acronis supports all the latest Windows and Mac operating systems, they also include support all the way back to Windows XP SP3 or claim to support all Mac OS versions. As for your actual systems, the requirements are low only requiring 1GB RAM, a 1Ghz Pentium processor or better and 1.5GB of free disk space. According to the notes on the site, Windows XP x64 is not supported.

Order Acronis True Image Backup 2015
Popular
Recent
Beginner’s Guide to Understanding Google Plus 239 comments
What is Tsu? A Beginner Guide and Reference 98 comments
My Experience with Affiliate Summit West 2015 #ASW15 12 comments
The Secrets to Internet Marketing Success 12 comments
25 Awesome Social Media Icon Sets for 2015 10 comments
YouTube Guide to Traffic and SEO 10 comments
5 Best Ways to Clean Up and Optimize Your WordPress 4 comments
The Dangers of Wi-Fi Hotspots – How a VPN Can Help June 24, 2015
Top 5 Solutions to Backup Your WordPress Website June 6, 2015
5 Best Ways to Clean Up and Optimize Your WordPress June 5, 2015
How to Delete or Edit an Image Gallery in WordPress Posts June 4, 2015
How to Create an Email for Your Domain Name June 3, 2015
10 Steps to Host an Amazing Google Hangout with Crowdcast June 2, 2015
How to Create and Update a Menu in WordPress June 1, 2015